How Earth Came to Be: From the Big Bang to Planet Formation

How Earth Came to Be: From the Big Bang to Planet Formation

The past quarter century has brought the discovery of thousands of planets orbiting other stars and new telescopes that can observe planetary systems as they form. With these, astronomers are finally building a fuller picture of planetary systems other than our own and how they form. But the complete story of the origin of planets and our own solar system requires reaching back further in time to understand how the ingredients that built the planets were gathered from exploding stars, and how the very existence of planets around a star may depend on where that star was born. I will take you on a tour of the late history of the universe, through some of the most monumental upheavals, to reveal how we are all connected to the big bang.

In the natural world we see trees, flowers, insects, animals, soil, rivers, rocks, and mountains around us. Above us we see birds, clouds, the Moon, the Sun, and stars. The air carries the scent of life.

Based upon measurable evidence and logic, science provides a profound understanding of the origin of things dating back in deep time to almost 13.8 billion years when the origin event governed by quantum gravity began our universe. Over the next small fraction of a second the universe expanded by 26 orders of magnitude, and within the first three minutes all of the basic forces (gravity, electromagnetism, strong, weak) and components (electrons, protons, neutrons, photons) were assembled.

During the next 300,000 years the universe cooled enough so neutral atoms could form, but it would take another 150 million years before the first stars would light up. It is these first stars that began the process of making the carbon and calcium in our bodies, the oxygen and nitrogen we breathe, and the silicon and iron that comprises the Earth. As our universe aged, galaxies formed, stars died, black holes merged to generate gravitational waves, and space expanded. Most recently, science determined that a mysterious “dark energy”, acting like an “anti-gravity” force, is driving an increase in the universe expansion rate. The ultimate fate of the universe is still controversial but, in general, it is thought that as the universe expands into the far future (greater than 100 Trillion years) fewer stars will be born, the existing stars will die, and the universe will darken.

In the “Sounds of Science” David B. Walters, LSU School of Music, has rendered his interpretation of the evolution of the universe and life on Earth into a musical composition that reflects the mystery and majesty of the known science. With the composition premier on November 9th, a collaboration between the LSU School of Music, the LSU Department of Physics & Astronomy, the East Baton Rouge Public Library, and the LSU Manship School of Mass Communication is launching a series of public events in 2023 exploring NASA’s James Webb Space Telescope(JWST) mission, our understanding of the universe, and how music provides an alternate method for understanding our place in the universe.

A performance of “Sounds of Science” is scheduled for 7:00 pm on March 25, 2023 at the EBRPL Main Library followed by a panel discussion on science and music composition. A schedule of events plus background reading will be available starting in the January 2023 edition of the EBRPL newsletter The Source. 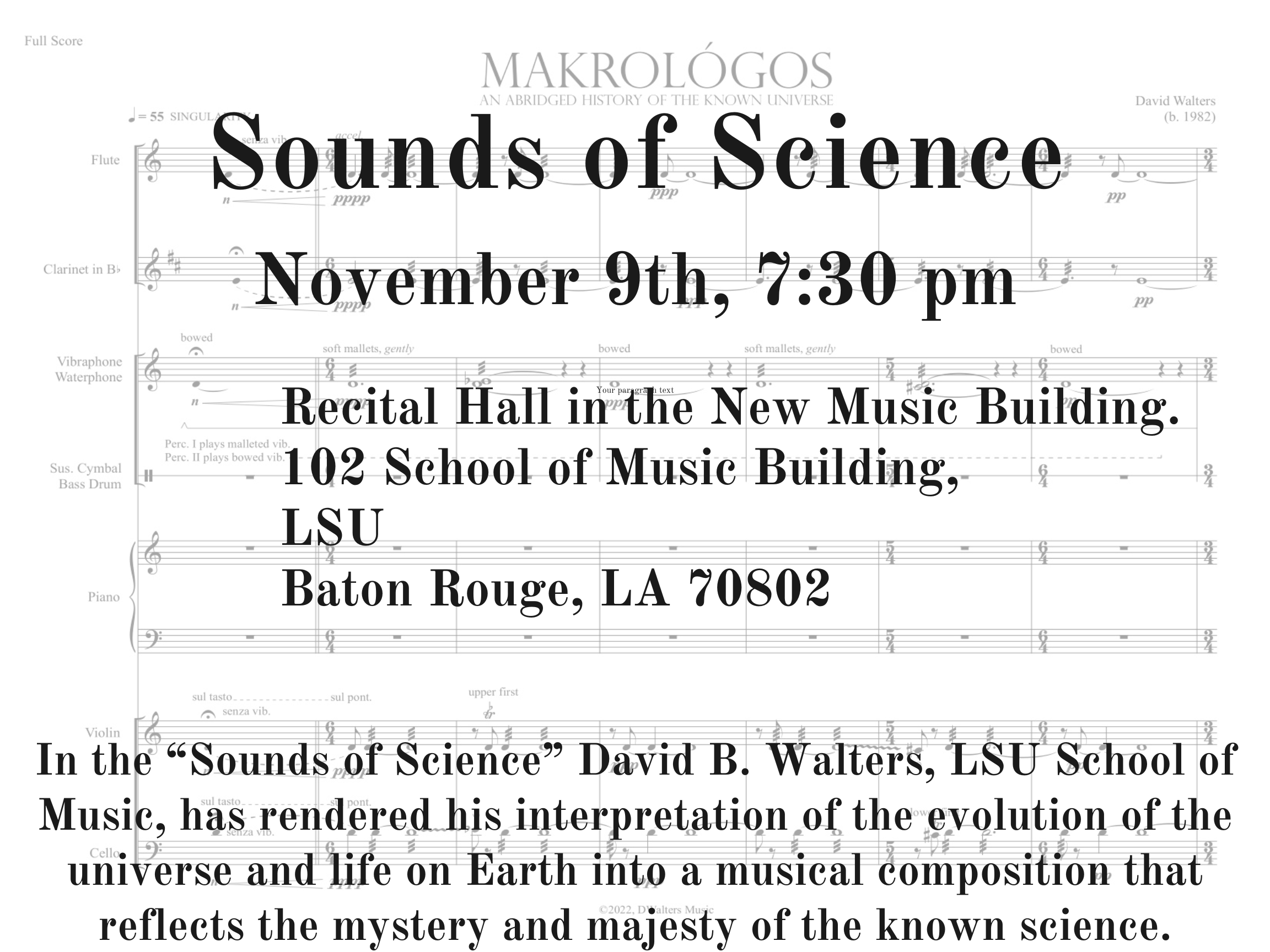