One Book One Community 2022: Atchafalaya Houseboat: About the Book 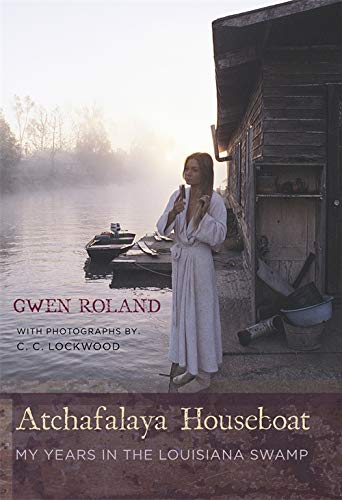 “In the 1970s, Roland and partner Calvin Voisin converted a dwelling into a houseboat and lived for eight years in the Louisiana swamp. Lockwood's photographs of their alternative lifestyle, published in National Geographic , brought the couple fame. Roland subsequently wrote a series of articles for newspapers and magazines about her bohemian way of life, compiled here in this edited collection. A natural storyteller, Roland describes the environment, challenges, and grit of daily life in the swamp. She retells the stories she heard of the swamp community and recounts her own struggle to live off the land. She and Voisin fished, hunted, farmed, and made butter. Hers is a gentle and interesting tale, bookended by her reflections on the past in a prolog and epilog. Well written and engaging, this travelog/memoir includes 25 of Lockwood's famous black-and-white photographs of the couple. Sure to be popular with armchair adventure travelers; recommended for larger public libraries.” -- Library Journal Review from NoveList Plus

"In the early 1970s, two idealistic young people—Gwen Carpenter Roland and Calvin Voisin—decided to leave civilization and re-create the vanished simple life of their great-grandparents in the heart of Louisiana's million-acre Atchafalaya River Basin Swamp. Armed with a box of crayons and a book calledHow to Build Your Home in the Woods, they drew up plans to recycle a slave-built structure into a houseboat. Without power tools or building experience they constructed a floating dwelling complete with a brick fireplace. Towed deep into the sleepy waters of Bloody Bayou, it was their home for eight years. This is the tale of the not-so-simple life they made together—days spent fishing, trading, making wine, growing food, and growing up—told by Gwen with grace, economy, and eloquence.

Not long after they took up swamp living, Gwen and Calvin met a young photographer named C. C. Lockwood, who shared their "back to the earth" values. His photographs of the couple going about their daily routine were published in National Geographic magazine, bringing them unexpected fame. More than a quarter of a century later, after Gwen and Calvin had long since parted, one of Lockwood's photos of them appeared in a National Geographic collector's edition entitled 100 Best Pictures Unpublished—and kindled the interest of a new generation. That photo and many others by Lockwood are included here.

With quiet wisdom, Gwen recounts her eight-year voyage of discovery—about swamp life, wildlife, and herself. A keen observer of both the natural world and the ways of human beings, she transports readers to an unfamiliar and exotic place, preserving her great adventure for those who did not make the trip in person."

More on Atchafalaya Houseboat from The Advocate!

Don't forget to check out more about the documentary and get a recipe from Gwen Roland too!